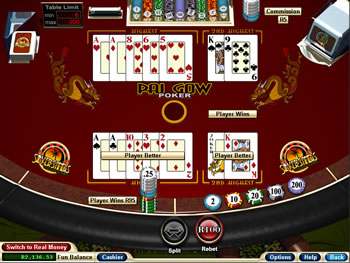 As its name implies, Pai Gow Poker can trace its roots to the ancient Chinese game of Pai Gow that was played with intricate symbols painted on dominoes. Throughout the years, different versions of the game evolved until it reached the shores of America in the 19th Century. The biggest change to Pai Gow poker came in the late 1900’s when dominoes were replaced were cards and the game was made more suitable to Western tastes.

The objective of Pai Gow Poker is to beat the dealer at the game, which is played around a table consisting of up to six other players. Seven cards are drawn and the player needs to make two separate hands, consisting of five and two cards. The hands are ranked according to traditional poker values and, for the player to beat the dealer, he or she has to make two hands that are worth more than the dealer’s.

You can find out much more about Pai Gow Poker by reading the detailed description of Pai Gow Poker at Wikipedia. For more details on the rules and the scoring in baccarat, you can view our pai gow poker rules page.